Dr. Sarah Levison is a native Oregonian and attended Wilson High School in Portland.  She graduated in 1990 from the University of Oregon (GO DUCKS!!) where she received her Bachelor of Arts in Biology and a Chemistry minor.  Oregon Health Sciences University School of Dentistry was next on the list where she graduated in the Top 10 of her class with Honors and received two top faculty awards: Top Female Dentist of the Year and Top Pediatric Dentist of the Year.   Dr. Sarah had been an avid volunteer with Medical Teams International and has traveled to Honduras, Indonesia, and Cambodia to help serve the world’s poorest communities.  She and her husband Scott are also the Co-Directors of Sea Mercy, a non-profit that brings dental and medical help to the remote South Pacific Islands. She has recently retuned from a 2 week dental mission in the Lau Islands of Fiji.  She has also volunteered with the Give a Kids a Smile program, the Oregon Mission of Mercy, and was voted Top Dentist in Oregon as decided by peer review in 2009, 2010, 2011, 2012, 2013, 2014, 2015, 2016, 2017, 2018, and 2019.  She is fluent in Spanish.﻿ 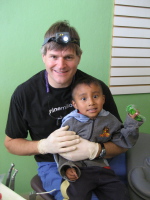 Dr. Scott grew up in San Luis Obispo California and attended California Polytechnic State University where he received his Bachelor of Science in Biochemistry.  He also received his California Teaching Credential and taught high school science class before entering Oregon Health Sciences University School of Dentistry.  There he met Dr. Sarah and the two have been practicing dentistry together ever since.  Dr. Scott has volunteered internationally with Medical Teams International in Mexico and Honduras and he has volunteered locally with the Oregon Mission of Mercy.  Dr. Scott is an avid athlete and has completed three Ironman triathlons. They have four beautiful children and live locally in Lake Oswego. ﻿

Request an Appointment via Email

Keep informed of everything going on at Levison Dental Group via our site.